The latest from the Society

Click here for some reviews of our shows ..... NODA SE

With deep regret we have to announce the sad passing of a long standing SDMS member Sheila Justice, who passed away on Thursday 8th October.

Along with her husband Colin (a previous Chairman and busy backstage helper of SDMS) and her daughter Julie, Sheila was involved in every aspect of the society for many, many years. Our thoughts are with her family.

Matt Sackman appointed as Director for Sunshine on Leith next April at Ferneham Hall in Fareham. He will be pulling out the stops to produce this new venture for us. Matt is a well known SDMS member and his first role as director for us was our last production - Avenue Q. We are sure you'll agree that he did sterling work with that production so we are looking forward to seeing his vision for Sunshine on Leith!
Matt will be assisted by Alan Jenkins (our current Chairman and a leading player) who is also very keen to be involved in producing some of shows in the future

55 Years of SDMS - Chairman, Alan Jenkins talks to the News

We are delighted to announce that Jesus Christ Superstar, which we performed at Ferneham Hall in July 2011, received the runners-up award for Best Amateur Musical Production at the Guide Awards at the Kings Theatre on Monday 14 November 2011

The recognition from News readers and theatre critics emphasises what a great show it was, and what talent we have within the society - as well as the diverse nature of all our performers, who continue to shine in whatever type of production we choose to put on.

The award was collected on behalf of SDMS by Alan Jenkins, Paul Tully, Tom Hudson and Samantha Kelly (who beautifully sang "I Don't Know How To Love Him" and brought the house down!). We were supported by large number of society members in the audience and thanks to all of you for taking the time to attend.

To all those who were involved in JCS in whatever capacity take a bow!

Please click on the link below to read an interview with our chairman, Alan Jenkins, about our next show Jesus Christ Superstar as published by the News this month - June 2011.

Chairman talks to the News ..

Helen played the part of Peggy in our production of 42nd Street in November 2009 and as you will read in the News she has played many versatile roles, hence she is a winner!

This award was for '42nd Street' produced by our very own President/Producer Audrey Pring in her 80th Year! Read all about it in the News.

SDMS' website has had a complete refresh for the new decade! All the content from the old website, including the complete archive are available to peruse still, although some pages have retained the old format due to time constraints. With the new format we have a contact page for you to get in touch with the society, please see the contact page. 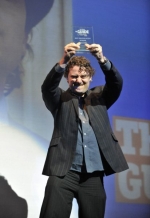 SDMS member Paul Tully receives his award for Best Amateur Actor at The Guide Awards ceremony held at the Kings Theatre, Southsea on November 16th 2009. Paul was recognised for his work over the previous year which included a memorable star turn as Professor Higgins in My Fair Lady at the Kings, and a tour de force performance as Jekyll (and Hyde) at Ferneham Hall in July.

Read more in The News